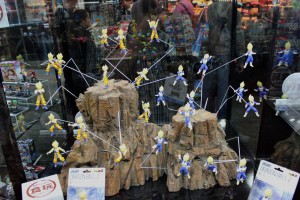 This weeks NYC Toy Fair has brought us some awesome pictures of the new Dragon Ball Shodo figure line. These guys are about the save size as Hybrid figures in the 4 inch category and are super articulated.

So far they have only made two figures the Goku and Vegeta pictured. If they go well I would expect a lot more from this line. Being a smaller and cheaper alternative to Figuarts they could make all the Z fighters and hopefully these will be released world wide instead of limited to Japan and America like other Dbz toys released recently.