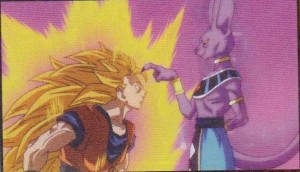 It could be a month or two or it could be a year or two before we get an full official English dub of Dragon Ball Battle of Gods but for now we have a pretty cool translation of the trailer.

It’s been an amazing year for DBZ fans and it shows how dedicated we all are too. We have had Team four Star continue running the epic Dragon Ball Abridged, Dragon Ball Absalon being made by a single animater and the official Dragon Ball 2013 movie which beings the whole gang back for another near death adventure.

For now here’s the full fan dubbed trailer. I think once it hits the cinemas in Japan it will be about a week before it’s been translated and dubbed by fans.