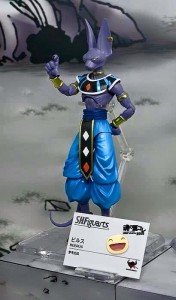 After three years of being one of the most wanted toys for any Dragon Ball Z fan we are finally going to get an official S.H.Figuarts Beerus toy.

Over the years we’ve had a few custom versions of Beerus/Berusu but this one looks to be pretty much perfect.

I’m not sure why it took Bandai so long to make this toy but it may have had problems with licensing. Either way this one should be available late 2015-early 2016.