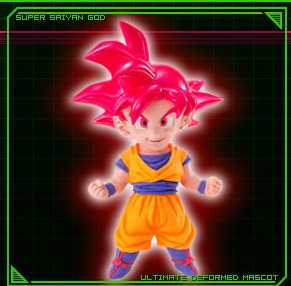 It’s smashed its ticket sales target in Japan and Battle of Gods hasn’t even been out a week. Roll on the toys.

As they have wanted to keep Super Saiyan God Goku hidden from the public until its release we have seen very few toys of the new look red hair Goku. This is the first Gashapon Dragon Ball toy to be released as part of the Ultimate Deformed Mascot toy line. It’s only about an inch tall and will fit on your phone or make a nice keyring.

These have only just been released in Japan and will soon be heading world wide once all the internet distributors get orders in.