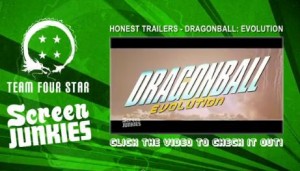 This could very well be the best thing to come out of the Dragon Ball Evolution. It was the film which had a lot of potential but just did almost everything wrong.

Honest Trailers do an awesome job of highlighting the best and worst bits of movies and for this one they have teamed up with the legendary Team Four Star who brought us some of the best dubbed anime ever made.