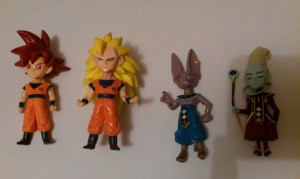 A year on from the release of Dragon Ball Battle of Gods and we still haven’t had any proper toys made yet. The ones we have had include the WCF mini statues which are massivly over priced as they were only released in Japan.

The bootleggers have been busy making ko Birusu figures in Mexico and now China have made much more affordable yet badly painted versions of the WCF mini figures.

These copies are perfect for customs if you want the heads for figures or you don’t mind repainting them.

If you are worried about buying a bootleg there are a few distinctive differences.

In the pictures below the Birusu WCF on the left is the official one and the ones on the right of it are fakes. Out of these fakes Wiss is the worst in terms of paint and moulding and SSJ3 Goku is probably the best quality of the set.

Overall if you have been after a set of WCF Battle of Gods figures but can’t afford the expensive over priced official ones these are a great alternative. With a bit of paint and some time it wouldn’t be hard to fix them up.