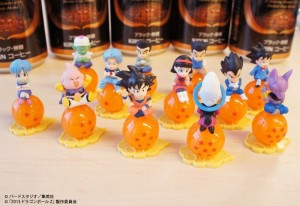 These are the first official toys that have been released for the new Battle of Gods movie. They are mini SD type figures sitting on Dragon Balls which unplug and fit in your ear phone jack.

The set consists of 12 mini figures including the two new characters Wiss and Birusu. These guys are about an inch tall and will soon be widely available.

These are going to be just the start of hundreds of DBZ toys both official and un-official based on the new Battle of Gods movie.