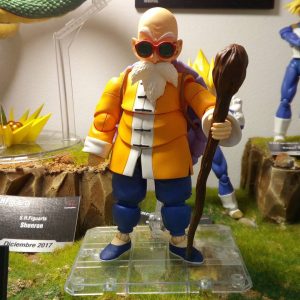 The S.H.Figuarts Dragon Ball line has been without a doubt the coolest DBZ toy line so far. The figures have the most articulation and and make just about any action pose. The only down side so far has been the selection. We’ve had so many Goku figures along with a lot of recolored versions and even a few resculpts which haven’t expanded the line as far as they should have.

In 2018 Tamashii Nations will expand the toy line with a whole new figure, one that has been in demand for a long time. Enter S.H.Figuarts Master Roshi. He’s the most original figure we’ve had in a long time. Personally I think most of the figures they have released in the toy line over 2015 and 2016 have been lazy but this more than makes up for it and will be well worth ordering when it comes out.