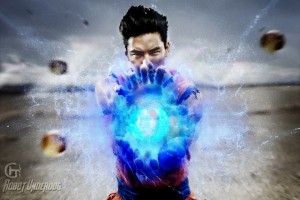 Robot Underdog is currently creating what looks to be the best live action DBZ series ever made and behind their script is none other than the foremost authority on all things Dragon Ball – Derek Padula, author of Dragon Ball Z “It’s Over 9,000!” When Worldviews Collide , and the upcoming book called“Dragon Ball Culture” that reveals the traditional culture of the world’s most recognized anime and Manga.

Derek is the screenplay writer of Dragon Ball Z: The Light of Hope, created by Robot Underdog . The project is a new Live-Action Dragon Ball Z Web Series centered on Gohan, Trunks & the Androids taking place in the dystopian future of an alternate Dragon Ball timeline.

Taking time away from writing the screenplay Derek has been kind enough to answer a few questions about the upcoming DBZ fan film.

How did you get involved with the Dragon Ball Z: The Light of Hope project?

I met the producers of Robot Underdog in Los Angeles as a consultant on their live action DBZ project. Then about half a year later they emailed and asked if I wanted to be involved as the head writer. I found out later that a fan of The Dao of Dragon Ball had recommended me to be the writer.

I felt it would be a great opportunity to bring Dragon Ball Z to life in the way fans have always wanted, and a chance to challenge myself. I was hesitant at first, but then I thought, “What would Goku do?” So I said yes.

What can we expect from the project you’re working on with Robot Underdog?

Dragon Ball fans can expect a live action series that is true to the spirit and integrity of Akira Toriyama’s masterpiece. Unlike a certain Hollywood adaptation, I’ve written the episodes in a way that incorporates the genuine personalities and feelings of Bulma, Gohan, Trunks, and the Androids.

There’s a healthy amount of transformation, both physically and spiritually, that occurs across each of their story arcs amid the fighting. There’s a nice blend of action and drama, with occasional Dragon Ball style jokes to lighten the mood. It takes what you know and love about Dragon Ball and makes it real.

As a fan of Dragon Ball, I wrote this series to create something that fans will enjoy watching for years to come.

Rewriting Dragon Ball to be a live action must be a difficult job, what have been the main challenges you’ve faced so far?

For me it wasn’t about recreating the anime, it was about telling a universal story in the Dragon Ball setting with the Dragon Ball characters in a Dragon Ball way. AkiraToriyama doesn’t explain his characters, he shows their actions and leaves it up to the audience to interpret. That makes the characters easy to write so long as you understand the roles each character plays and the emotional connections between them. I know these characters well, so it was a simple question of, “How would Android 17 react to being kicked in the face by Trunks?” And then it flows.

I finished writing all of the episodes in one shot over a couple of weeks, and while it was an effort, it came naturally. I meditate every day, and each time I sat down I received inspiration that entered my mind and later traveled through my hands onto the page. Or as I was falling asleep it would pop into my head, I’d jump out of bed and write down a few lines. The script was written quickly because I was inspired.

The hardest part was learning how to format a screenplay, as that was a new adventure. But it only took a day or two.

What’s it like working with the awesome Robot Underdog team?

They’re in Los Angeles and I’m in New York now, so we did everything over the Internet. I’d love to be there for filming, but right now that’s not an option. Whenever they need help writing some lines for a follow up piece, such as the script for a trailer, they send me a message and I get back to work. I enjoy seeing the episodes progress from concept to completion.

Have you got plans for writing any more live action fan films?

No plans for more. There are a surprising amount of live action DBZ fan films being made across the world. I’ve been contacted by others to help out in the past, which I did to varying degrees, but I felt that Robot Underdog’s had the most potential, so I said yes to writing the entire script from scratch.

What do you think the future of Dragon Ball is?

Dragon Ball is an evergreen series that continues to entertain people across the world and make money, whether it’s through films, comics, video games, or toys. I predict it will be around for a long time.

Now if only Akira Toriyama would create a new one!

When and where can we get your new book?

Dragon Ball Culture is scheduled for a late February release in ebook, followed by print in English and Spanish. Fans will be able to buy it on Amazon, iTunes, Google Play, Barnes & Noble, Kobo.