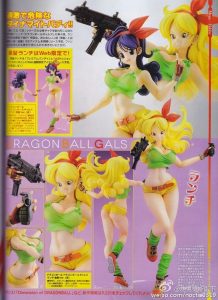 Megahouse are making some amazing statues at the moment in their Dragon Ball Gals line. The next one appear to be Lunch from the original series. She’s one of the funniest and under used characters in Dragon Ball. One of the reasons for this was that while writing manga Akira Toriyama actually forgot about her. The same happened to Yamcha at one point too.

This one follows on from the massively successful Dragon Ball Gals Bunny Bulma and Android 18 statues. When Lunch was in the manga she had a temperamental split personality. The statues seem to reflect that and come in two different versions. At first it looked like it was an alternative head but the arms change between the two versions too and look seamless. It might be that the calm Lunch is a variant / web exclusive.