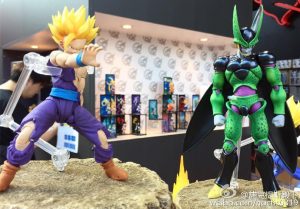 Thanks to some pictures from Japan Expo 2016 we have the first preview of some upcoming S.H.Figuarts characters.

The first one is a Cell saga battle damaged Gohan which features the new style of articulation. We also have a premium color version of Cell.

Both look like big upgrades compared to their previous releases. Although it is a shame that Cell is just a repaint, it would have been a great time to release a variation of him. Even if the Premium color versions had different heads I think they would generate more interest.

At the moment there isn’t a release date set for these two but they will likely be out ready for December 2016 as it”s not been too long since they released S.H.Figuarts adult Gohan.