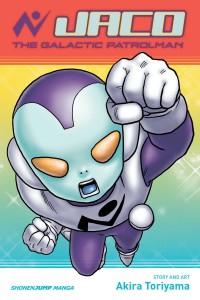 When I first picked up this manga I thought it would be another random stand alone story from Akira Toriyama ,but I was so so wrong. This is one of the most fun mangas I’ve read in a long time.

Take a look at Jaco the Galactic Patrolman on Amazon.

The story follows the Galactic Patrolman Jaco, he is one of many galactic patrolmen in the universe but he was the one with the mission to save Earth from an impending invasion.

On his way to Earth his ship gets damaged and he crash lands on an island with a total inhabitants of one. A scientist named Omori who lives their. his one mission in life is to perfect his time machine so he can go back in time to change a horrible accident which killed his wife and research team.

That sets us up for an amazing story where these two unlikely hermits and Tights become friends and help each other out.

Like I mentioned earlier this mange feels just like Akira Toriyama’s work when he was in his prime working on the original Dragon Ball Manga, he did great when it went to DBZ but his original love was for DB. It had humour, great characters and the artwork just tells the story much like Dr Slump if you’ve come across that too.

Being a prequel it ties into the Dragon Ball manga seamlessly. The story overlaps at the end and it also has a few characters including a young Bulma, her older sister Tights has a large part in the story as they all help each other out.

The biggest question I have about this manga is why we haven’t seen more of it. I’d love to see what happens with Jaco and professor Omori over the next 20 years. Omori is one of Toriyama’s more interesting characters and we know hardly anything about him.

Lastly thanks to Viz Media for translating and releasing this manga classic.