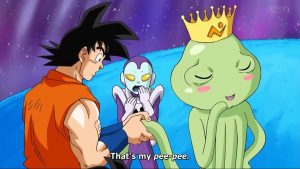 The original Dragon Ball series which followed young Goku and his battle against the Demon Piccolo was pretty much flawless. Anime fan or not I’ve never met someone who has seen the original series and not loved it all. Then due to high demand came the Dragon Ball Z series which although was a sequel was also the first series most fans were introduced to in the late 90s.

Dragon Ball Z was an amazing success and did a lot for the whole anime industry but as all good things it came to and end. After that we got a lot of hit and miss movies and a new series with Dragon Ball GT. Some fans liked GT and some hated it. They tried to follow on from DBZ and make something new but it didn’t follow all the original characters and was something else.

Then came Dragon Ball Super. It came out of nowhere following on from the last two anime movies Battle of Gods and Return of Frieza. Both had good success but felt a bit rushed. The company behind the movies decided to re make them in Dragon Ball Super, Battle of gods is stretched out between episodes 1-14 which had some pretty bad animation at the start especially during the Goku vs Beerus fight. Then came the Frieza sega again between episodes 15 and 27.

So far in the first 27 episodes we haven’t seen anything too new but with Dragon Ball Super episode 28 and onward it’s total Anime gold. They have managed to capture the humor of the original series with the urgency and fun of those epic battles.

For anyone who has’t been too sure about watching Dragon Ball Super so far,  just watch the last two anime movies and watch the series from episode 28. The new characters, the tournament it’s all amazing and just what Dragon Ball fans have wanted for years.