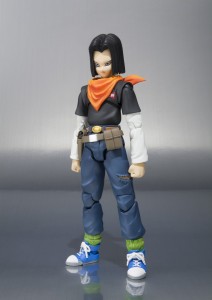 To help even the odds Bandai Tamashi Nations are releasing the a new bad guy in the S.H.Figuarts toy line.

So far Android 17 is tagged to an October 2014 release date which means he will likley be ready for December due to the usual delays.

So far we have had Cell and Freiza to build up the bad guy ranks and with the addition of Android 17 and 18 hopfully the next one will be Buu.

If you are thinking of buying an Android 17 figure I would highly reccomend taking Amazon up on this reduced price pre order as from my experience shops tend to double the price when they get released.