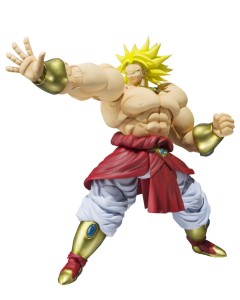 This year has been an amazing one for any Dragon Ball toy collector. We’ve seen the long teased and awaited S.H.Figuarts Son Goku. Now we have one of his most powerful enemies as Broly get released at the end of the year.

The S.H.Figuarts Broly is due out December 2014 according to Amazon and if it is on time it will make the best Christmas presant for any DBZ fan.

Broly will tower above all the other toys in the series keeping him scale with the others. At the moment Amazon have him listed on the best pre-order price at $67.99 USD.